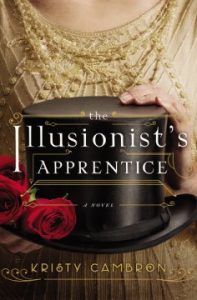 Harry Houdini’s one-time apprentice holds fantastic secrets about the greatest illusionist in the world. But someone wants to claim them . . . or silence her before she can reveal them on her own.

Boston, 1926. Jenny “Wren” Lockhart is a bold eccentric—even for a female vaudevillian. As notorious for her inherited wealth and gentleman’s dress as she is for her unsavory upbringing in the back halls of a vaudeville theater, Wren lives in a world that challenges all manner of conventions.

In the months following Houdini’s death, Wren is drawn into a web of mystery surrounding a spiritualist by the name of Horace Stapleton, a man defamed by Houdini’s ardent debunking of fraudulent mystics in the years leading up to his death. But in a public illusion that goes terribly wrong, one man is dead and another stands charged with his murder. Though he’s known as one of her teacher’s greatest critics, Wren must decide to become the one thing she never wanted to be: Stapleton’s defender.

Forced to team up with the newly formed FBI, Wren races against time and an unknown enemy, all to prove the innocence of a hated man. In a world of illusion, of the vaudeville halls that showcase the flamboyant and the strange, Wren’s carefully constructed world threatens to collapse around her. Layered with mystery, illusion, and the artistry of the Jazz Age’s bygone vaudeville era, The Illusionist’s Apprentice is a journey through love and loss and the underpinnings of faith on each life’s stage.

I haven’t read many historical novels set in the 1920s, so I really appreciated the new era. I’d never read anything by Kristy Cambron before and didn’t know what to expect. Overall I really enjoyed this book! It hooked me right away, and the author writes with exquisite detail, which made the characters and setting easy to picture. The plot was a little slow in setting itself up (it takes a while to figure out why Wren and Amberly are so involved with each other and drama), but I still really liked the story line and characters, so I stayed right with the book.

However … I could not get past the flashbacks! I wanted to know what was going to happen between Wren and Elliot; how were Wren and Amberly connected; why were any of them being investigated? Instead, every 3-4 chapters I had to go to Wren’s past and read a chapter about her earlier life. By the time I got to the third flashback chapter I was annoyed; when I got to the fourth one I started skimming pages (and skipping a lot). There wasn’t really anything in the flashbacks that the author couldn’t have revealed within the context of the story without having to interrupt everything to go back. It got to the point where I was dreading any chapter that didn’t include the 1927 date at the beginning. If it hadn’t been for all of those flashbacks, I would have given the book four stars. I hope Cambron writes more books (and I hope she cuts some of the flashbacks).

*I received a free copy of this book. The opinions are my own.