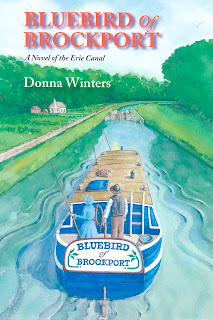 Bluebird of Brockport, A Novel of the Erie Canal

Dreams of floating on the Erie Canal
have flowed through Lucina Willcox’s mind since childhood. Yet once her family has purchased their boat and begins their journey, they meet with one challenge after another. An encounter with a towpath rattlesnake threatens her brother’s life. A thief attempts to break in and steal precious cargo. Heavy rain causes
a breach and drains the canal of water. Lucina comforts herself with thoughts of Ezra Lockwood, her handsome childhood friend, and discovers a longing to be with him that she just can’t ignore. Can she have a future with Ezra and still hold onto her canalling dream?

Ezra Lockwood’s one goal in life is to
build and captain his own canal boat, but two years into the construction of
his freight hauler, funds run short. With his goal temporarily stalled, and
Lucina Willcox back in his life, his priorities begin to change. Can he have
both his dreams — his own boat, and Lucina as his bride? 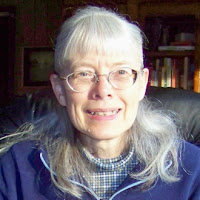 Donna spent her childhood in Brockport (twenty miles
west of Rochester, New York), growing up a quarter mile north of the Erie
Canal.  She recalls boat horns and lift
bridge bells luring her to run up the Main Street hill and catch a ride on the
bridge.
After graduation from Brockport High School in 1967,
Donna attended SUNY Potsdam where she earned her Bachelor’s Degree in Music
Education. Following a brief teaching career in Hancock, New York, Donna
married and relocated to her husband’s home state, Michigan, where she has been
living since December 1971.
Donna’s writing career began in 1982 while working
full time for an electronics firm. She resigned from her job in 1984 following
a contract offer for her first book. Since then, Thomas Nelson Publishers,
Zondervan Publishing House, Guideposts, and Bigwater Publishing have published
her novels. Bluebird of Brockport is
her seventeenth novel, and her sixteenth historical story.  Her husband, Fred, a former American History
teacher, shares her enthusiasm for history. Together, they visit historical
sites, restored villages, and museums, purchasing books and reference materials
for use in Donna’s research. In preparation for writing Bluebird of Brockport, they spent a month traveling along the Erie Canal, visiting canal towns and museums.
Learn more about Donna and her previous titles at www.greatlakesromances.com
Connect with her blog at: http://greatlakesromances.blogspot.com
Connect on Twitter: @bigwaterpub https://twitter.com/#!/bigwaterpub
Connect on her book page at http://www.facebook.com/pages/Great-Lakes-Romances-Books/223500374355494